A Global View of Quality of Life: Introducing the New HDRO Website for the United Nations Global Development Programme

It’s not every day you have an opportunity to help rethink and redesign a website that is global in its impact and audience. We've been honored to work on such an important endeavor and so we're thrilled to announce that we have launched our first website on behalf of the United Nations Development Programme (UNDP).

Highlights of the Redesign and Rethink

A New Section with Interactive Data and Country Profiles

The most notable reports delivered by the HDRO teams are driven by data, and data informs how the UN and governments around the world understand the state of human health and happiness in each country and relative to each other.

The Human Development Index incorporates dozens of individual data streams that form an aggregate ranking of the state of development in every country. We created the site's framework using Drupal 9, allowing the new HDRO website to seamlessly host a custom data visualization app, allowing users to view and explore aggregate data from individual countries as well as more easily compare across them.

Partial view of the new country page template, incorporating both narrative and interactive charts to better tell the story behind the data: 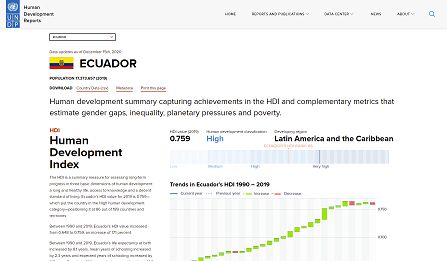 Compared to the old website, where data had minimal interactivity and lacked contextual narrative: 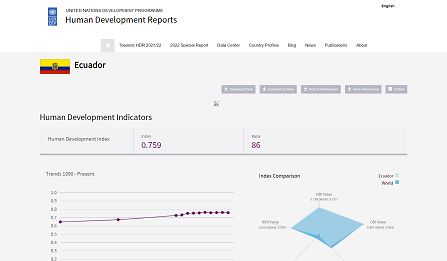 HDRO has produced hundreds of reports and special publications for several decades, all of which have played a role in the decision making systems of the UN. They’ve helped inform policymakers, helped the press understand the challenges and opportunities within and among countries, and provided rational, scientific methodology to the study of human development.

Our new site empowers the HDRO team like never before. First, we identified the need to centralize a dispersed set of document repositories that had grown organically over time. Second, we helped the team simplify and update the taxonomies that are used to categorize content. And third, we managed a careful migration of thousands of pieces of content using the new taxonomies, while using the UNDP’s new design system to help manage and uniformly display the report covers and related assets / downloads.

The new Reports and Publications section includes updates to the taxonomies and a unified search interface that had previously been scattered:

Numbers, as is said, only tell part of the story. Indeed, numbers that reflect human development without humans in the story, and without creative ways of showing snippets of data will fall short. And so a big part of the project’s strategy and design was to incorporate stronger photography and other visual assets such as infographics to help connect numbers – the raw data – with the people and places that inform them.

The new HDRO site incorporates elements that bring urgency and humanity, as well as polished design and related content, to the indices and data:

We’ll continue telling the story of the HDRO website in future case studies and the blog. Please let us know if there’s an aspect of the project that particularly interests you and we’ll incorporate these into future posts.

And do get in touch with John to discuss your next project. Whether local, regional or global in scale, we’d love to work with you!