As a long-time Drupalist, I have to confess a wandering heart. Over the past couple years, I've grown more and more interested in other software and bigger-picture issues, branching out from the trials and triumphs of developing sites with my favorite CMS and looking increasingly at issues of integration and platforms. However, recent news has brought Drupal itself right back into the center of my thinking. With all respect to the Wu, I have to bite off a venerable hip-hop-ism in light of the recent run of news: Drupal Rules Everything Around Me.

The two bits of news I'm most excited about came through last week. First was the relaunch of Whitehouse.gov on Drupal. A lot of the reporting on that event (both pro and con) was typically fuzzy technology journalism — even prompting some correctional responses to the FUD — but overall I think the NY Times Circuits Blog got the essence of the story right:

To some, the White House shift to Drupal from a proprietary software package represented a serious seal of approval for open-source software.

“While open source is already widespread throughout the government, its adoption by the White House will almost certainly give permission for much wider uptake,” wrote Tim O’Reilly, who publishes books and holds conferences about open-source software.

The truth is that the use of Open Source code (Drupal or otherwise) for the whitehouse.gov site probably says very little about what functions that site will exhibit. Given my back-story with the Howard Dean campaign I admit I get a thrill from seeing our technology win out, but the site itself isn't going to change radically: it will remain a tightly controlled, top-down public relations website for the President. The "political ramifications" here are small, if not nil.

However, the business ramifications are very real. The addition of an ultra-high-profile site to the roster of Drupal adopters, likely the biggest signal launch so far, is the latest in a series of signs that Drupal is growing past the initial "early adopter" user base that's been driving the market for the past three or four years.

Following on that event, Dries published a blog to let us all know that Drupal is in the visionaries quadrant in the latest Gartner research report on "Social Software in the Workplace." This is a very good sign for future adoption of the software, and a major coup for Acquia's marketing efforts: 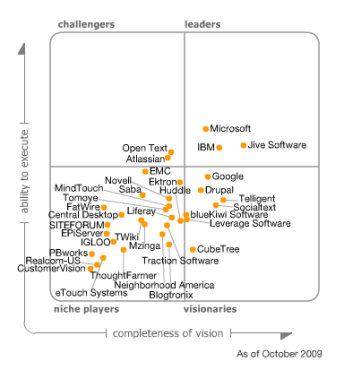 This is another important step towards increasing enterprise/institutional adoption of Drupal as a platform. Along with the other great developments we're seeing with "Drupal products" (or distributions, if you prefer) and strong growth in the training sector, 2010 looks to be a very bright year for Drupal. It's an exciting time to be a member of this community, and a participant in this rapidly evolving market.