Rolling and Writing: Getting to (remotely) know you

When I started at Chapter Three in mid-2021 I found myself in a challenging situation. I was a brand new employee who wanted to get to know my co-workers, but I also work remotely and wasn’t going to see them in person anytime soon. Given the upsurge in remote work across the economy, mine is an incredibly common situation. Fortunately, I had an ace up my sleeve. I love games. Board games, video games, tabletop RPGs, all of it. So I figured I could use my passion to connect with people in non-work ways. Of course that immediately runs into a slew of other problems. Will busy people want to take time out of their day to learn and play a game? Can you play on company time or do you have to ask people to use their free time? How do you play with everyone when most games are limited to 4-6 players? Aren’t people tired of Jackbox and Among Us? With all of this in mind I turned to the world of roll-and-write games which solve all of these problems and more.

Roll-and-writes are evolutionary offshoots of the family-game staple Yahtzee. Generally speaking, all of these games have a shared random generator that each player uses to make permanent progress on a score sheet, usually to get the most points. Popular modern examples include games like Welcome To, where you build a suburb or On Tour, where you map a band’s tour route, and Super-Skill Pinball where you build up big pinball combos. The genre is having a big resurgence lately and there are dozens of choices. I went with a personal favorite, Railroad Ink. 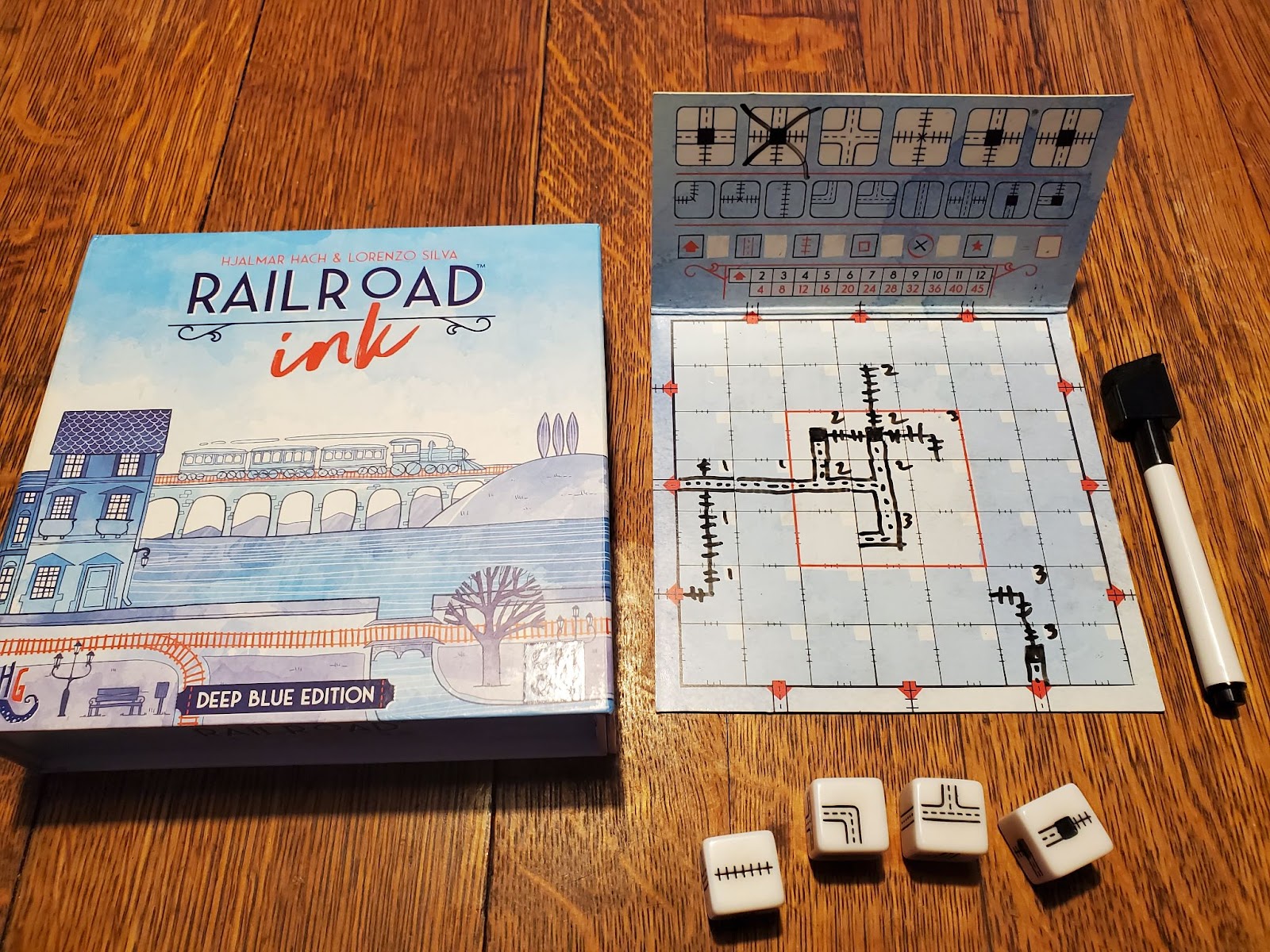 The game is pretty simple to play. Each of the pictured dice have a unique combination of roads and railroads on them. A round starts with someone rolling the dice, then each player draws every rolled road and railroad section on their own personal player board. You have to draw from an existing connection of the same type, and after each round your choices are locked in. You’ll do this seven times. At the end of the game add up your points for things like connections and longest road, subtract points for connections that go nowhere, and whoever has the highest score wins the game.

Railroad Ink says it’s a game that plays 1-6 players for about 30 minutes. However, with a little ingenuity, I changed it to a game that plays unlimited players in any time frame we want. First, I made a dedicated slack channel for those who wanted to play. This ensures that the game doesn’t interfere with work discussions and vice versa. Next, I had all the players download a pdf* of the game board, and made sure they could either print it or draw on it digitally. Joan De Maria specifically mentioned that she “loves having an excuse to keep colored pencils on my desk and actually use them throughout the day.” After a quick meeting to explain the game we were ready to go. For each round I simply roll the dice and add a picture of their results into the channel. Then players, at their own pace, take their turn and when they’re done they add a thumbs up emoji to the picture. Once everyone has taken their turn I roll a new round. After the first game, we collectively decided that players have roughly four hours to play their turn, after which point it’s fair game to nudge them in the group chat. 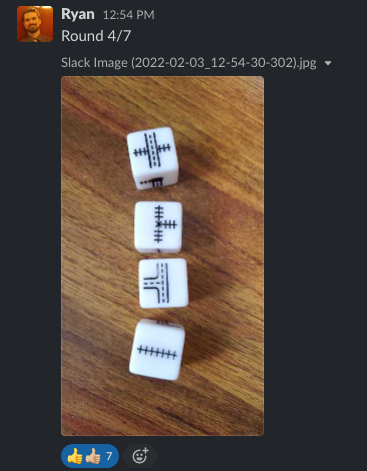 This setup has a lot of advantages. First, it can take any number of players, so there’s no need to find something that scales up or down on player count. Second, it can be played totally asynchronously, so people can take their turn when they have some extra time and need a brain break. Finally, the game doesn’t have any direct competition between players until the very end which makes it very low pressure and still fun to play even if you don’t win. When discussing the game, Ryan Conklin said “It’s a really good cadence to take your mind off something for a few minutes. But fast enough that you’re not spending a ton of time on it or breaking workflow.”

Most roll-and-writes can fit in this asynchronous digital framework. This effectively removes a lot of the friction that prevents people from playing games with co-workers in the first place, making participation much easier. Obviously this doesn’t wholly compensate for not working in the same office, but it creates a little space for non-work interactions and connections to naturally occur.

Together we curse or praise the fickle nature of the dice gods. We laugh at the ludicrously impractical, but point-rich, cities that we create. We can all groan when reminded of the infamous “Oops, all T-intersections” game we played. It’s silly, but it's something.